Calculation of the HDI

As described in the definition, the HDI consists of three components: GDP, life expectancy and the level of education of the population. For all these components an index is determined as follows:

The actual value is the value currently measured to determine the index. The lower limit value was determined in 1987, it is the lowest measured value worldwide. In the case of life expectancy, for example, it is 25 years. The topmost value is an objective, 100% for education. The uppermost value of 85 years is calculated for life expectancy.

An average value is now determined from the three values:

A great advantage of the HDI is that it puts human development in the foreground. The index recognizes the importance of education and health. Development is therefore not primarily measured in terms of economic factors such as income and purchasing power.

However, the HDI does not take ecological factors such as environmental protection or climatic changes into account. Economists like Bryan Caplan also accuse the HDI of incorrectly weighting the three indicators. According to him, life expectancy and GDP should be included more in the value.

Economists like Ranis, Stewart, and Samman emphasize the interdependence of human development and economic growth, and both should take place concurrently in order to generate development. In the calculation of the index - in addition to the education and health care system - the degree of inequality in the income distribution as well as the opportunities for the unemployed, paid employment should be found, as well as the educational opportunities - especially for women.

Nonetheless, by considering fundamental needs and opportunities in life, the HDI conveys a far more complex picture of a country's development than GDP. The following graphic makes it clear that countries that position themselves in almost the same position in the HDI report (Brazil 75th place in 2009 and Russia 71st place in 2009) can show a large gap between their GDP per capita. There is also the possibility that countries with almost the same GDP may well be far apart on the HDI measurement scales. 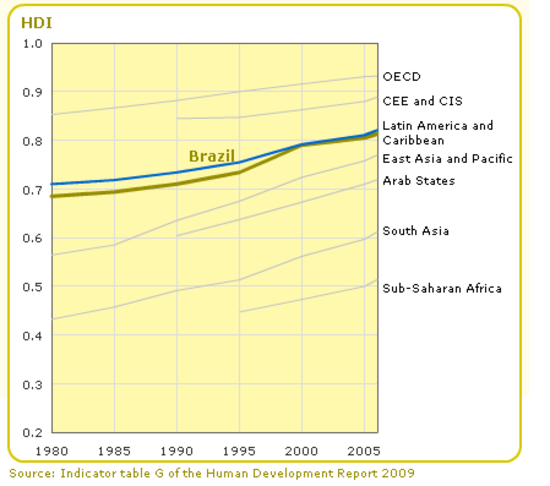 1 Calculation according to source: http://www.mzes.uni-mannheim.de/users/rothenbacher/lehre_HS2006/Landes_Floerchinger_Sorgungs.pdf