Whether on land, on water or in the air: Portugal's fauna is extremely diverse. In addition to many well-known animal species, you can also find some rare species in Portugal that are only found here on the Iberian Peninsula or on the Portuguese islands. 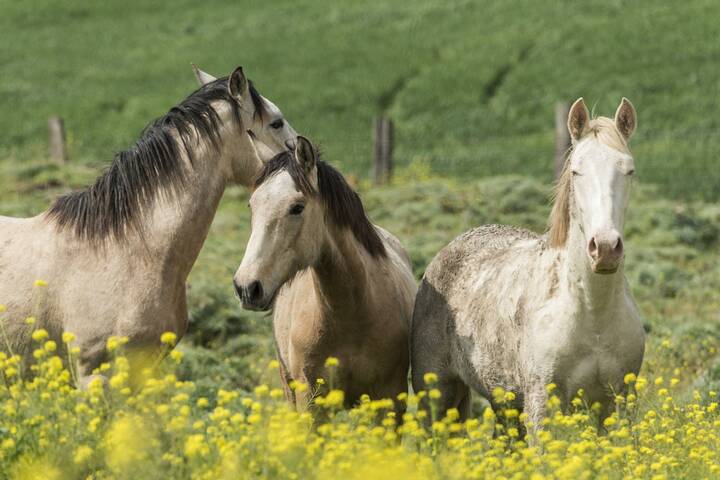 Belonging to the Iberian Peninsula and its geographical location between the Atlantic and the Mediterranean as well as Africa and Eurasia determines the impressive diversity of Portugal's fauna. Due to the numerous landscape forms and climatic conditions, there is a large number of different biotopes and habitats for many animal species.

The regional fauna is particularly diverse in the national and nature parks as well as nature reserves and biosphere areas spread across the country. Due to the comparatively thin population of Portugal, especially in the higher inland areas, some species have been preserved outside of the protected areas that have not lived in the wild for a long time elsewhere in Europe.

The easy accessibility and short distances make the westernmost country on the continent a perfect travel destination, especially for nature lovers and holidaymakers who want to combine a beach holiday with beautiful excursions.

Mammals: Predators in the wild

The most common native mammals in Portugal include the red fox, the European badger, the Iberian lynx and the Iberian wolf.

An important national protected area for the heavily endangered lynx is the 16,000 hectare Reserve Natural Serra da Malcata near Penamacor and Sabugal in the Beira Interior region not far from the border with Spain. In the 70,000 hectare Parque Natural do Vale do Guadiana in the Baixo Alentejo province and in the Serra de São Mamede in the Portalegre district, there are also isolated specimens.

The Iberian wolf is still native to the north of the country today. Mainly in the Serra da Coroa near Vinhais and Bragança in the Bragança district in the Trás-os-Montes e Alto Douro province, smaller packs are spotted time and again.

The two predatory species that occur almost exclusively here are noteworthy. On the one hand the Ichneumon, the only European mongoose species, and on the other hand the gorse cat. The gorse cat has a special position in the animal kingdom because it was worshiped as a cat-like deity in the ancient land of the pharaohs, today's Egypt. As the only type of gorse cat today, the so-called Kleinfleck gorse cat can only be found in France, except in Portugal.

The Iberian ibex is also typical of Portugal's fauna. Closely related to the already extinct Portuguese ibex, it still lives sporadically in the inaccessible and mountainous area of ​​the more than 700 km² Peneda-Gerês National Park in northern Portugal. The only national park in the country has also been a UNESCO biosphere reserve since 2009 and is home to many other mammals characteristic of Portugal such as wild cats, weasels, wild boars, martens and even a few brown bears.

The horses of the Portuguese noble breed Lusitano are known and valued worldwide. Some of the most magnificent specimens are sold for tens of thousands of euros. Portugal is very proud of their Lusitano horses. In the past they were mainly used for bullfighting, today they are bred more and more according to the requirements of dressage riding.

Almost three dozen species of reptiles from eleven biological families live on the Portuguese mainland as well as on Madeira and the Azores. Particularly noteworthy are the scale reptiles, snakes and turtles.

Chameleons, for example, are quite typical of the mostly hot and dry Algarve in the south of the country. However, these are more likely to be found in the less heavily populated and touristy areas inland. The characteristic brightly colored geckos can often be seen there, the European half-finger or Turkish half-finger gecko and the wall gecko are widespread.

An endemic species from the uninhabited Ilhas Selvagens archipelago in the Madeira region is the gecko species Osga-das-selvagens.

The slow worm, a lizard species from the sneak family, lives mainly in the dense forests in the north. The habitats of the double sneaks are spread over the entire state territory. The numerous real lizards represented come from the families of the pearl lizards, Iberian green lizards and mountain lizards, bocages and Spanish wall lizards. The Madeira lizard of the same name, which is also often referred to as the Madeira wall lizard, only lives in Madeira.

Adders make up the largest family of the snake species; in the mountainous areas of the north-west, inverted-nosed vipers and North Iberian adders can also be found here and there. New World pond turtles, Moorish brook turtles as well as sea turtles and leatherback turtles live on and off the coast.

Are there dangerous or poisonous animals in Portugal?

In addition to the inverted-nosed vipers and North Iberian adders mentioned above, as well as the spider species also mentioned above, Portugal has a number of other potentially dangerous and / or poisonous animals.

In the Alentejo and the Algarve there are some centipedes, but their venom can only lead to deaths in the rarest of cases and only in people who are already sick.

In the sea off the southern coast there are also weever from the perch family, whose stings can cause swelling, dizziness and headaches in allergic bathers. The same applies to rays and jellyfish, especially the Portuguese galley and sea urchins.

The locally widespread processionary moth is also not to be despised in its dangerousness for humans and possible animal companions such as dogs. The animal can shoot its hair at attackers up to 5 meters away. This can have tragic consequences, especially for dog owners, because such an attack often ends in death for the dog. In humans, the hair of the processionary moth can trigger asthma attacks and even life-threatening shock.

The Asiatic wasp found in northern Portugal is an insect that can also be dangerous to humans. The animal, about the size of a hornet, almost always carries out its attacks in swarms, which can be very uncomfortable for the victim, and resistance by a person is then hardly possible.

Fish: biodiversity in the water

Well over 100 species of freshwater fish live in Portugal. The waters in the over 26,000 hectare nature park and UNESCO biosphere reserve Parque Natural do Tejo Internacional in the Castelo Branco district in the Centro region are particularly rich in species. Numerous eels, barbels, lampreys, bony fish, carp and catfish live there.

Many of the endemic species in the smaller lakes of the densely populated sub-region Zona Oeste north of the capital Lisbon are unfortunately seriously threatened with extinction due to drought and environmental pollution.

The sea off Portugal's coasts is extremely biodiverse. Herring, sardines, tuna and mackerel in particular are caught in large quantities and prepared for human consumption.

The Atlantic Ocean with the coast of Portugal in the south and west of the country is one of the best places in Europe to go sea fishing. The sea bass is considered a very good tasting and sought-after fish. It can be found near the Portuguese coast and in estuaries. He is very fast and agile in his area.

A sea bass must be at least 36 cm long to be caught. But a sea bass can also take on enormous proportions: 11 kg in weight and 1 m in length are not uncommon for the animal.

The billy bream, on the other hand, is rather shy and nocturnal. It lives mainly in underground crevices up to 50 m deep. The tasty fish must be at least 27 cm tall to catch, it can be up to 35 cm tall and weigh up to 3.5 kg.

The black scabbard fish lives in the waters around Madeira and, despite its terrifying shape, is a popular food fish on the island.

With around 600 different species, the diversity of bird life in Portugal is significantly higher than in most other countries in Europe and the world. In addition to the numerous native species, many migratory birds from regions in central and northern Europe also spend the winter here.

The Algarve in particular, as a geographical “stepping stone” to Africa, is extremely species-rich. Here, for example, pigeons, herons, ducks, ibises, tits and falcons can be observed in large numbers.

The 56,000 hectare Parque Natural da Serra de São Mamede in the municipalities of Portalegre, Castelo de Vide, Marvão and Arronches in the Portalegre district in the north-east of the Alentejo region is also an area that is ideal for hobby ornithologists on holiday. Of the 150 species that can be found there, such as the Bonelli's eagle, griffon vulture and eagle owl, around 40 nest on site.

Spiders: Eaten rather than feared

Although there is a community in the Castelo Branco district called Aranhas (spiders) and the sea spider crab is one of the popular specialties in Portugal, the country is not a real stronghold of the multi-legged arthropods.

Frequently seen are primarily the weaving spiders, which also live in many places and widespread in Germany. The southern black widow is extremely rarely seen in dry areas between scrub and stones. Real spiders, tarantulas and scorpions also live in sparsely populated areas in the Alentejo and the Algarve.

Insects: What creeps, crawls, flies and stings between Porto and Faro

The approximately 38,000 species of insects on the Iberian Peninsula are represented to the same extent in both Spain and Portugal. In a global comparison, bugs, constant-winged birds such as cicadas and plant lice, mosquitoes, butterflies as well as wasps, bees and hornets are more widespread. Numerous species of beetles also live specifically in wooded areas.