How do extremophiles survive mass extinction?

Life in the extreme: even where toxic volcanic gas pours out of the underground, there is life. Because researchers have now discovered entire communities of microorganisms in such mofettes. They feed on the escaping carbon dioxide and thus form the basis for their own small ecosystem - directly in the volcanic gas flow.

Wherever a volcano slumbers underground, volcanic gases often emerge from the ground through small openings. Carbon dioxide and sulphurous vapors do not exactly make these so-called mofettes a life-friendly environment - on the contrary: Dead birds, mice and other small animals are regularly found around such mofettes and only a few plants can defy the “poisonous breath” of the sleeping volcanoes.

How hostile to life are the mofettes?

In the 19th century, the volcanic gases even claimed fatalities: between 1864 and 1888, a total of 17 friars died in their sleep in Maria Laach monastery in the volcanic Eifel. “For the monks, carbon dioxide, which escapes in large quantities from the ground on the east bank of the Laacher See and could accumulate again and again in the building, was probably fatal for the monks,” says Kirsten Küsel from the University of Jena, explaining the mysterious series of deaths.

But are there perhaps also living beings that defy the poisonous gases? To find out, Küsel and her colleagues searched for microorganisms in a mofette in northwestern Bohemia - and they found them. As they found out, there are even numerous microbes that feel very comfortable in this apparently hostile environment. However, this is not extremely surprising, after all, we already know microbes that survive in boiling hot or icy cold water, in toxic heavy metal broth or even radioactively contaminated environments. 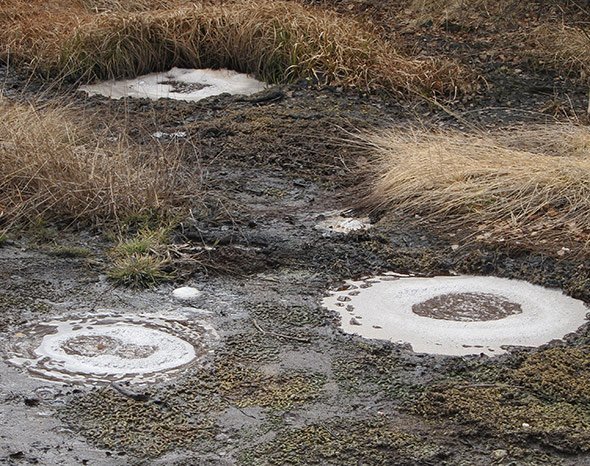 And the microbes in the volcanic gas not only survive stoically, they even benefit from the constant flow of gas, as studies have shown: They absorb the CO2 and convert it into methane, acetic acid and components of their cell structures. These bacteria, in turn, form the nutritional basis for other organisms in the Mofette - and this even creates a small ecosystem in this extreme environment.

The biodiversity in a Mofette is by far not as great as in comparable soils that do not contain volcanic gases. “But we are not dealing with such a hostile environment as it often appears above ground,” Küsel sums up. The researchers' results could also be useful outside of mofettes, as they help to predict the possible effects of gas leaks in underground carbon dioxide storage facilities and thus assess potential risks. (ISME Journal, 2015; doi: 10.1038 / ismej.2014.148)