Study: Americans' contradicting ideas about their privacy on the Internet

Last week the US Pew Research Center published a new study on anonymity and privacy on the Internet. Around 1,000 US Americans were interviewed over the phone. Buried under some contradictions and nonsense are a handful of interesting insights.

Privacy is not an all-or-nothing proposition for internet users. People choose different strategies for different activities, for different content, to mask themselves from different people, at different times in their lives.

Especially since the study was carried out in mid-July, it can be questioned why only a fraction (5%) of the respondents had concerns about government surveillance. Furthermore, one can only hope that more people are now using encryption.

However, the study also shows that many people understand 'privacy on the Internet' as the giving up or withholding of certain information. The study asked what information from the respondents might be found on the Internet for others: pictures, name, address, telephone number, videos, etc. However, this shows how antiquated our understanding of how third parties obtain information about us. This data plays a role, of course, but it is much more crucial and, for the creation of a profile, much more important to analyze activities: with whom is communication being communicated, for how long and at what time? Which websites are visited? Which messages are read, which are ignored? How big is the social network and who is it made up of? These aggregated Information is much more meaningful than a date of birth or a family photo - but it is only slowly finding its way into the public debate and thus into the consciousness of the population.

Two other connections worth mentioning: People who try to protect their privacy online are also more aware of the fact that there is no such thing as absolute anonymity. Interestingly enough, those who try to evade surveillance at the same time reveal significantly more about themselves. (see graphic) This supports the statement from the beginning that anonymity is ultimately about freedom of action: the freedom to determine how much you want to reveal about yourself - this informational self-determination is unfortunately becoming more and more utopian. 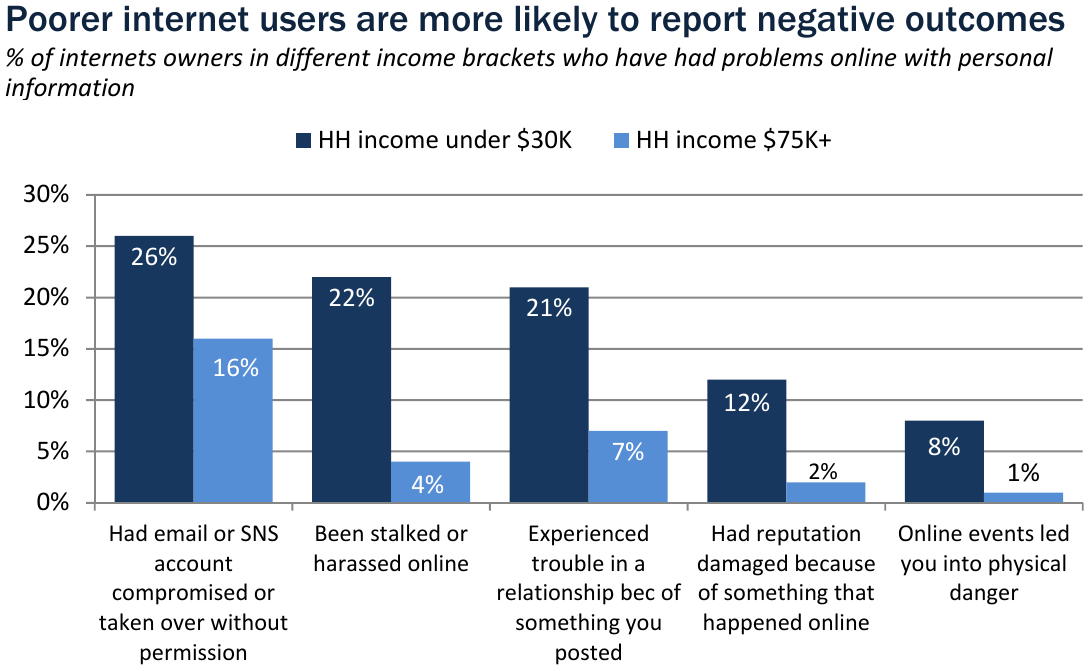 Another obvious link is between a respondent's income and the likelihood that they have had negative experiences with anonymity. In households with an annual income of less than USD 30,000, there were significantly more stolen accounts, online bullying / stalking or a loss of reputation. This can be taken as an indicator that the digital divide is not primarily about mere access, but also about information and education.

It would be interesting to see to what extent the opinion of the respondents has changed in the next 2-3 months. Thanks to Edward Snowden's revelations, the 'big newspapers' are now also writing on topics such as encryption, government Internet surveillance, profiling and the increasingly complete loss of privacy on the Internet.

Our work at netzpolitik.org is financed almost exclusively by voluntary donations from our readers. With an editorial staff of currently 15 people, this enables us to journalistically work on many important topics and debates in a digital society. With your support, we can clarify even more, conduct investigative research much more often, provide more background information - and defend even more fundamental digital rights!

You too can support our work now with yours Donation.

Business IT specialist and sociologist. 2013 intern at netzpolitik.org. With the new responsibility foundation since 2014. Interested in a lot. Works primarily on intelligence control, protection of privacy, transparency, net neutrality and frequency policy. Tweets far too seldom. (@JPKleinhans)
Published 09/11/2013 at 4:51 PM
<?