How many jazz standards are there

The advantage in jazz is that there are already hundreds of great compositions that you enjoy playing over and over again.

At the beginning of the 20th century, jazz was pure entertainment music that was played live by big bands to encourage people to dance at parties. The songs were a mixture of chansons, hits, pop songs, songs from Broadway shows and musicals or melodies from Hollywood films.
These catchy and popular songs have become standards over time.

In Gypsy Swing there are of course many other standards, such as the compositions by Django Reinhardt, popular Gypsy Bossas, as well as some waltzes.

The musical sequence of a standard

Over the decades, a unified way of playing standards has developed. The advantage is that rehearsing new songs is simplified and the musicians also have the opportunity to jam together without having to make further arrangements. Only the title of the song is announced and off you go.

1. Such a standard usually begins with an intro. This determines the pace.

2. Then comes the theme, the theme song, the face of the song, so to speak.
The theme usually goes through every chord in the song (one chorus long).

3. Then the individual musicians solo over one or more choruses.

4. At the end of the song, the theme is played again.

5. Some songs have an outro at the end.

In order to be able to play with other Gypsy jazzers, you should know at least 20 standards. At least learn to play their rhythm by heart.
Here is a list of the (probably) most frequently played Gypsy Jazz standards. Many of them are also relatively easy to learn.

The goal as a musician

A good jazz musician should think of a song ...

... be able to recite the order of the chords (i.e. the harmony progression) in your sleep.

... can play the chord progression transposed into other keys.

... be able to play the topic by heart. Preferably in any key.

... know the harmony and the key changes of each song and know how to solo over them.

As soon as you can rhythmically accompany a standard by heart, learn to play its theme as well. Every song has its own harmonic peculiarities to solo over. The topic helps you to get started with the solo.

There are countless fake books (also called real books) that contain hundreds of jazz standards, with the chord progressions and melodies, sometimes with texts. Almost without exception, however, these are printed in sheet music. These can be used as a trick in a pinch, which you can sometimes even see at concerts with jazz musicians.

In Gypsy Swing everything is played by heart without exception, which can be traced back to the fact that most Sinti cannot read music.

Ideally, you can find a teacher who can teach you a topic in a very clear and precise way, with all the phrasing and alternative melodies.
There are now countless videos on YouTube in which the topics are presented step by step.

In Djangolizer you will find an informational text for each song with recommendations from videos that I personally find worth seeing and instructive.

Of course, you can also try to hear the topic note by note.
This is actually the best exercise for a musician anyway, but it is also a time-consuming one.
Most of the time the theme is mostly based on arpeggios or at least a scale. To do this, activate the arpeggio and scale view in Djangolizer.

Some topics are also relatively simple and easy to hear.
Try "Sheik of Araby", "Oh, Lady be good" or "Limehouse Blues". Ballads like "Clair de Lune" or "Autumn Leaves" are also ideal for the first attempts.

For songs that are played very quickly, there is various software for tablets and smart phones that can slow down the tempo while maintaining the same pitch. The quality remains so good that you can now comfortably hear the individual notes.

The difficulty with listening out is finding the right fingerings and positions on the fretboard.

For daring guitarists there is still the game of figuring out how Django could have played the solo with just his index and middle finger.

Choose the song “Minor Swing” or “Minor Swing - 5 chorus solo” to practice the topic.
The theme of "Minor Swing" is played over the intervals 1, b3 and 5 of Am and Dm.
I've added a second guitar that plays an alternate second voice. The intervals are in the order 5, 1 and b3.
Two possible bass lines are notated above the E7 chord. Usually, however, the bass player plays these lines. 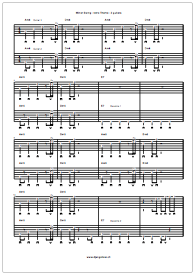 The final theme is played a little differently than the intro theme, but this also consists only of arpeggio notes and ends with a chromatic run. 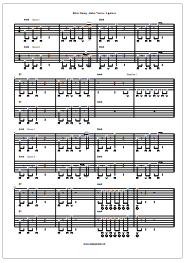 In order to be able to write down melodies note by note, Djangolizer offers the option of printing tablature or note lines in addition to the chord table.
Remember, most of the themes are played via the chord tones (arpeggios). With Djangolizer, set the arpeggio view and also the scale view on the fingerboard in order to be able to find the right notes more quickly. This also gives you a good starting point for storing the melody more easily in your head if you can relate it to a scale at a certain position on the fingerboard.