What is the tensile strength of wood 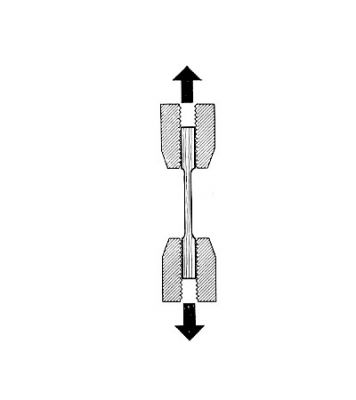 in the longitudinal direction by tearing or tearing off. It is important for struts or crossbars in wooden towers, half-timbered structures, for drawbars, etc. The coarser anatomical structure

expect. The tensile strength of the threads practically does not depend on the strength

of the main valence chains, but on the resistance of the micelle to lateral sliding.

the tensile strength increases, with increasing wood moisture it decreases, but not to the same extent as the compressive strength

The tensile strength of solid wood is relatively seldom determined because its determination is associated with certain difficulties and because in practice it is of less importance than other strength properties. The latter is related to the fact that the tensile strength measured on small, faultless samples does not provide a reliable guide to the tensile strength of larger pieces of the same trunk, since branches and growth defects have a very strong influence. However, in cases where specially selected valuable wood is processed (for example in aircraft construction) and in the case of tempered wood, in which the growth properties are largely balanced, one cannot do without testing the tensile strength. Tension members often appear in structural engineering, especially in timber engineering structures; Their resistance to tensile forces can only be properly characterized if test pieces with the same cross-section

the structural members are torn in sufficiently large test facilities.

When the wood is stressed in the construction industry, tensile stresses across the grain are carefully prevented, since in many cases the unavoidable radial shrinkage cracks would directly endanger the cohesion of the wood.