What constitutes a fugue in music

The form principle of the joint

A characteristic of the beginning of a fugue is that the voices do not start at the same time but one after the other. Two elements play a special role: the subject and the counter-topic (contrasubject or counterpoint). Which part begins is up to the composer. How and when the topic sounds is regulated.

This fugue is in four parts.
The voice that begins (here the tenor) brings the theme of the fugue in its basic key (tonic).

When the theme has sounded completely, the next voice starts with the theme (in this fugue this is the alto), this time it sounds in the dominant.

Then the remaining voices follow one after the other (here first the soprano and finally the bass) with the theme, which has to be alternated in the tonic and in the dominant.

For tonal reasons, one or more tones are often changed at the beginning of a come so that they fit into the harmonious environment (green note in the example above, green circles in the graphic below).

The result is the following sequence: 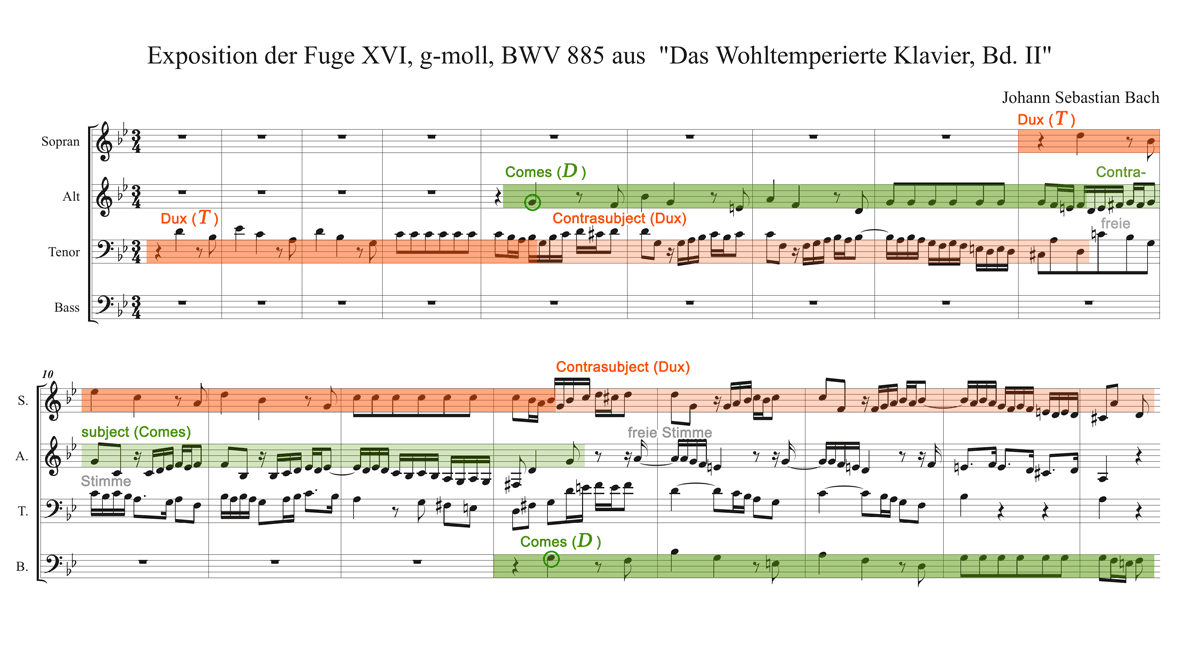 While a voice sounds the topic, the contrasubject appears in the voice that had the topic immediately before. This can always be the same (then it is called retained contrasubject) or each time a different one. In this example it is a persisted contrasubject:

Once the topic was heard in all voices, it was once carried out: One speaks of an implementation. The first execution of a fugue is called an exposition.
(Attention: The terms "execution" and "exposition" have a different meaning in a different genre [sonata].)
After the exposure, the first section of the joint is finished.

Now a so-called interlude follows. The task of the interlude is to create a playful counterpoint to the strict concentration of the previous performance. Most of the time, the melodic figures of an interlude are derived from elements of the theme and / or the contrasubject. The number of voices is often reduced during the interlude.

All of the elements that make up a joint are now listed.
An interplay of concentrated implementation (whereby the topic does not always have to be carried out through all voices) and casual interludes develops. While there is no room for tonal variation in the implementation (Dux - Tonika, Comes - Dominante), the possibility of modulating remains, i.e. a change of key reserved for the interludes, which corresponds to their playful character.

How many developments and interludes follow one another is up to the composer. The length of the fugue depends on what your subject and the contrasubject "produce".

As a highlight, a so-called narrowing is often set at the end of the joint. The topic assignments overlap while the topic is being carried out. I.e. one voice brings the topic, while it still sounds in another voice.

Which votes the Dux and which the Comes have is arbitrarily chosen in the following graphic. The order of Dux and Comes is mandatory.

(This graphic can be downloaded as a PDF here.)