What is euro short for? 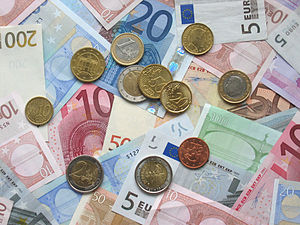 The euro is a currency, a type of money that is used in the European Union. 19 EU countries have the euro as their currency. They form the so-called euro zone.

The euro is not a currency of a specific country, but was invented by the EU so that you don't always have to exchange money when traveling to other countries. Before that, every country had its own currency. In Germany there was the Deutsche Mark, in Austria you paid with the shilling.

The euro was introduced in 1999. At first, however, the countries only used the euro in trading transactions. The euro has only existed as real money since 2002. In 1999, eleven countries had the euro, including Germany, Belgium, France, Italy and Austria. Later, more and more countries in the EU adopted the euro, 19 until today. Countries like Denmark or Sweden do not have it to this day, although they are in the EU. In six small countries that do not belong to the EU, however, you pay in euros, for example in Andorra and the Vatican.

On the face of the coins you can always see a map of Europe and a number of how much the coin is worth. The reverse side varies from country to country. The notes represent buildings of different architectural styles from history. The 50-euro note, for example, shows buildings from the Renaissance. These architectural styles were common in many countries and are intended to show what Europe has in common.