Our seasons are shifting

Climate change and its consequences

The climate change is now so clear that the first effects on nature can be seen. The growth phases are getting longer and the spring begins much earlier.

Since 1961, the vegetation period, i.e. the time of year in which plants grow, bloom and fruit, has been extended by around two weeks in our country. Snowdrops, which mark the beginning of early spring, bloom on average three days earlier per decade. The same applies to the apple blossom, which indicates the beginning of full spring. The beginning of spring and summer is shifted forward around 2.5 days per decade across Europe as well. 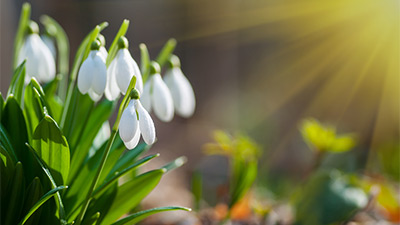 Since 1961, the snowdrops have bloomed around two weeks earlier on average.

In autumn, however, no significant trend in one direction can be observed. While in spring the temperature has a strong effect on nature, this is weaker or not as clear in autumn. The weather in the summer months plays a decisive role here. But diseases and pests also have a major influence on the beginning of the leaf color and thus on the beginning of autumn. 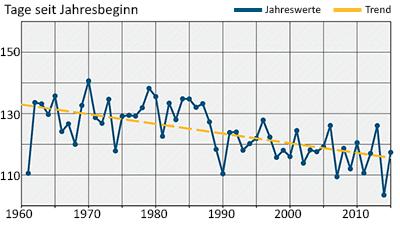 How the shift in the seasons affects animals and plants has so far only been partially clarified. For example, while some species of birds benefit from the early onset of spring, others suffer as a result. In particular, the finely tuned interplay of plant pollination could get out of hand in the future and have a drastic effect on the population development of certain plants and animals.