What are the missiles 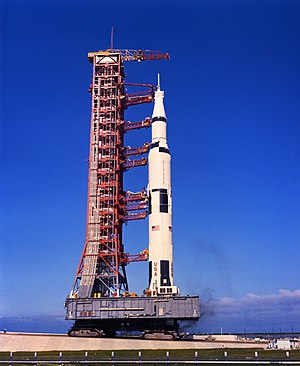 The mission for the first manned moon landing in 1969, Apollo 11, started with this Saturn V rocket. The rocket was over 100 meters high.

A missile is a missile with a recoil drive. This means that a missile moves forward by ejecting something backwards. This is their burned fuel. You can think of it something like this: If you sit in a rubber dinghy on a lake and throw a heavy stone backwards out of the dinghy, the dinghy will move forward. So you pushed yourself forward on the stone that you threw backwards. The shock caused a recoil.

Rockets usually have a long, slender shape, a point at the front and short wings at the rear end to stabilize the flight path. They accelerate for a long time, during the entire life of the fuel. This distinguishes rockets from projectiles, where the acceleration is extremely short but much stronger.

A rocket carries everything it needs for propulsion, i.e. fuel and oxygen. Therefore it can also fly in a vacuum. This is the only way to get into space. A rocket is then a spaceship. Aircraft engines need air to burn fuel. But that doesn't exist in space.

What are missiles used for?

There are different types of missiles. Everyone knows, for example, the fireworks rockets from New Year's Eve. They are only supposed to carry a load of fireworks high in the sky, where they can be clearly seen. You do not need any control for this. The long wooden stick stabilizes their trajectory.

Rockets are also used to transport astronauts and satellites into space. These missiles must of course be steerable in order to keep them on course. They are very large and must contain a lot of fuel. This also makes them extremely heavy. What is to be transported is only at the very front in the tip. All the rest is fuel and tank.

In order not to take a lot of weight with you all the time, parts of the rocket are blown off. This is also called multi-stage missiles. Most of them break off when they are burned out, i.e. when they no longer contain any fuel. With some rockets, however, you leave some fuel in and steer them back to earth in a controlled manner. So you can use the tanks again later.

But there are also missiles that are only used for military purposes. For example, they are supposed to carry projectiles or explosive devices during war. The first rockets in history were detonated for this purpose in China almost 800 years ago, i.e. in the 13th century. Gunpowder-propelled missiles were fired in the battle against the Mongols. The Mongols were terrified and terrified by these flying, smoking and stinking weapons.