What a band is Rise Against

Rise Against is a band with philosophy and the courage to commit: "We just do what we feel or are able to do"Says the singer Tim McIlrath about the projects the band supports."We just do it from the gut, we make a song, we do something good, we do a show. That's exactly what we do. The whole band stands behind this concept, they embodies it. We all stand behind it."

Founded in late 1999 by Joe Principe and McIlrath, Rise Against rises from the ashes of Principle's previous band, 88 Fingers Louie, who co-founded the Chicago hardcore scene. With the aggressive melodic punk and the hardcore traits, Rise Against takes up the guidelines that Principe had set in his previous band, and expands them to include the thought-provoking vocals of McIlrath.

The Chicagoers draw their musical inspiration primarily from punk greats such as Bad Religion, Minor Threat and Bad Brains. Supported by many fans of the 88 Fingers Louie, Rise Against quickly made a name for themselves in the HC underground.

A year after their first meeting, they play the first show and finally find a drummer who lives up to their expectations: Brandon Barnes from Colorado, formerly with Pinhead Circus. After the band has cut a demo tape, they find shelter at Fat Wreck Chords, the label of NoFX bassist Fat Mike.

In spring 2001 the four of them recorded their debut album "The Unraveling". To promote it, they are on stage with other HC greats, including Sick Of It All and AFI. They are on tour for two years, then in December 2002 they recorded their second record "Revolutions Per Minute". They are supervised by Descendents and Black Flag drummer Bill Stevenson. To reach a wider audience, they signed with DreamWorks in 2003.

But despite the emerging success, the musicians do not forget their band philosophy. You continue to work against racism and for animal welfare. In order to thwart the re-election of President Bush (in vain), they also support the Punkvoter campaign sponsored by Fat Wreck Chords.

After Rise Against and her previous guitarist go different ways, the former Reach The Sky guitarist Chris Chasse joins them in March 2004 and works on the recordings for their Dreamworks debut "Siren Song Of The Counter Culture". The album brings the music of Rise Against closer to a larger audience, from the brutal clubs like "State Of The Union" to anthems like "Life Less Frightening" or the punk ballad "Swing Life Away".

The successor "The Sufferer And The Witness" will be released in summer 2006 by Geffen. The video for the first single "Ready To Fall" is rejected by MTV because it contains unsavory scenes from PETA animal welfare videos.

The DVD "Generation Lost", which will be released in 2006, not only shows the band, but also portrays various fans and their motives for following Rise Against. In February 2007 Chasse got out on the very day when a tour with My Chemical Romance was supposed to start. 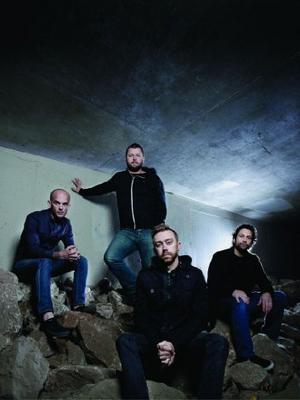 The guitarist is no longer able to cope with the growing pressure on the band due to their popularity and hands the ax over to Zach Blair from Only Crime. Chasse first pushes the calm ball and forms the combo Last Of The Believers.

In the summer the EP "This Is Noise" will be released as a digital only release, the now seven-track short record will be released as a physical sound carrier in April 2008 in Germany in a slightly greased version. In addition to B-sides and live versions, it also includes cover versions of "Minor Threat" by the band of the same name as well as Black Flags "Nervous Breakdown".

In the same year Rise Against work on the sequel to "The Sufferer And The Whitness". "Appeal To Reason" is set to be their most commercially successful album in the band's history and, in addition to positive reviews, brings them their highest Billboard placement. Then it goes on a big tour through North America, Australia and Europe. They play on the stages of well-known festivals such as Highfield, Area 4 or Lollapalooza, while their popularity continues to rise rapidly.

In 2011 her sixth studio album "Endgame" followed and lived up to her reputation as the moral conscience of the punk and rock scene. The songs refer to current political events such as Hurricane Katrina or the oil disaster of the Deepwater Horizon. They also position themselves against homophobia and bullying in their song "Make It Stop (September's Children)".

Regarding the studio album "The Black Market" (2014), the band emphasizes: "It wasn't easy: 'Let's record another album', but rather 'Let's create something. Let's really get into it and prove to ourselves that we can still challenge ourselves and our fans with our music'".

In their search for new challenges, they want to avoid artistic stagnation and also keep moving politically. Like in 2016 with the video for "People Live Here". In June 2017, "Wolves" appears with the forerunner "The Violence".