Absolute zero is called that because nothing can actually get colder than it. But now physicists have created an atomic gas in the laboratory that can take on negative Kelvin values ​​- and thus apparently still below zero. Does this sound like a paradox? It is - at least if you look at the actually impossible properties that this gas then exhibits. The researchers reported on their experience in the journal "Science".

What is normal for most people in winter was previously impossible in physics: a negative temperature. On the Celsius scale, minus degrees are not a big sensation. On the absolute temperature scale, which is used by physicists and is also called the Kelvin scale, however, the zero point cannot be undershot - at least not in the sense that something is colder than zero Kelvin. According to the physical meaning of temperature, the slower the chaotic movement of its particles, the lower the temperature. At zero Kelvin (minus 273 degrees Celsius) the particles come to a standstill and all disorder disappears. So nothing can be colder than absolute zero on the Kelvin scale.

Physicists from the Ludwig Maximilians University in Munich and the Max Planck Institute for Quantum Optics in Garching have now created an atomic gas in the laboratory that can still have negative Kelvin values. These negative absolute temperatures have some seemingly absurd consequences: Although the atoms in the gas attract each other and there is thus a negative pressure, the gas does not collapse - a behavior that is also postulated for dark energy in cosmology. With the help of negative absolute temperatures, even supposedly impossible heat engines can be realized, such as a motor that works with a thermodynamic efficiency of over 100 percent.

If you want to bring water to a boil, you have to supply it with energy. During the heating process, the water molecules move faster and faster on average; they increase their kinetic energy. The individual molecules have very different energies - from very slow to very fast. States of low energy are more likely than those with high energy - so only a few particles move very quickly. This distribution is called the Boltzmann distribution in physics. “The reverse Boltzmann distribution is exactly what defines a negative absolute temperature, and we have achieved it,” says Ulrich Schneider. The gas is not colder than zero Kelvin, but hotter, as the physicist explains: "It is even hotter than at any positive temperature - the temperature scale just doesn't stop at infinity, but jumps to negative values." 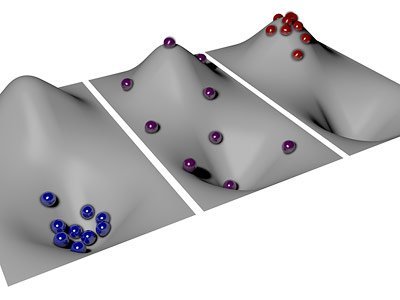 Temperature as a game of marbles: The Boltzmann distribution indicates how many particles have which energy, and can be illustrated with spheres that are distributed in a hilly landscape. At a low, positive temperature (left picture), as it is common in our everyday life, most of the balls in the valley have minimal potential energy and hardly move, so they also have minimal kinetic energy. States with low total energy are therefore more likely than those with high total energy - the usual Boltzmann distribution. At infinite temperature (middle picture) the spheres are distributed evenly over low and high energies in an identical landscape. All energy states are equally likely here. At a negative temperature, however (right picture), most of the spheres move on the hill, at the upper limit of the potential energy. Their kinetic energy is also maximal. Energy states with high total energy occur more frequently than those with low total energy - the Boltzmann distribution is reversed. © LMU and MPQ Munich

The importance of a negative absolute temperature can be illustrated with rolling balls in a hilly landscape, in which the troughs represent a low and the elevations represent a high potential energy. If spheres have a positive temperature and lie in a valley with minimal potential energy, this state is obviously stable - that is nature as we know it. The faster the spheres move, the higher their kinetic energy is: if one assumes positive temperatures and increases the total energy of the spheres, i.e. heats them, then they are distributed more and more in the landscape to areas of high energy. However, if they were on a hill at maximum potential energy, they would normally roll down and convert their potential energy into kinetic energy.

"But if the balls have a negative temperature, then their kinetic energy is already so great that it cannot increase any further," explains Simon Braun. “Therefore the balls cannot roll down and stay on the hill. The energy barrier makes the system stable. ”In her experiment, the state of negative temperature is actually just as stable as that of positive temperature. “In this way, we have achieved a negative absolute temperature in a system of moving particles for the first time,” adds Braun.

This reversal of the Boltzmann distribution cannot be achieved in water and any other natural system, since the system would have to absorb an infinite amount of energy, which is impossible. However, if the particles now have an upper limit for their energy, such as the top of a hill in the landscape of potential energy, the situation changes completely. The researchers working with Immanuel Bloch and Ulrich Schneider have now implemented precisely such a system with an upper energy limit in the laboratory for a gas made up of atoms, following theoretical suggestions from Allard Mosk and Achim Rosch.

Atoms trapped in the optical lattice

To do this, the scientists cool around a hundred thousand atoms in a vacuum chamber to a temperature of a few billionths of a Kelvin and trap them in optical traps made of laser beams. The surrounding ultra-high vacuum ensures that the atoms are completely thermally isolated from the environment. The laser beams form what is known as an optical lattice, in which the atoms are regularly arranged in lattice positions. The atoms can move in the lattice through the tunnel effect from lattice site to lattice site, but their kinetic energy is limited upwards and thus has the required limit. However, the temperature not only takes into account the kinetic energy, but also the total energy of the particles, in this system also interaction and potential energy. The system developed by the Munich and Garching researchers also sets an upper limit for this. The physicists then bring the atoms to this upper limit of the total energy - the temperature is thus negative, at minus a few billionths of a Kelvin.

The work of the Munich physicists could also be of interest to cosmology. Because the thermodynamic behavior of the negative temperature shows parallels to the so-called dark energy. Cosmologists postulate this as the puzzling force that causes the cosmos to expand ever faster, although it should actually contract due to the attractive gravity of matter in the universe.

There is a similar phenomenon in the atomic cloud of the Munich laboratory: The experiment is based, among other things, on the fact that the atoms of the gas do not repel, as in an ordinary gas, but rather attract. That is, they exert negative, not positive, pressure; the atomic cloud wants to contract and should actually collapse - just as one would expect from the universe under the influence of gravity. But because of its negative temperature, it just doesn't do this. It is saved from collapse just like the universe. (Science, doi: 10.1126 / science.1227831)