What Makes the State of Kansas Weird

The common pancake is apparently a particularly worthwhile research object for scientists. For example, what is the best way to turn this thing? Ten-week tests at the University of Leeds have shown: The personal throwing speed is calculated as the square root of pi times gravity, divided by four times the distance between the elbow and the pancake center. You're welcome.

Kansas as a flat area

In addition, a pancake is not as flat as it looks - the US state of Kansas is even flatter in comparison. This is what the work of Mark Fonstad and William Pugatch (both Texans) and Brandon Vogt from Arizona teach us. 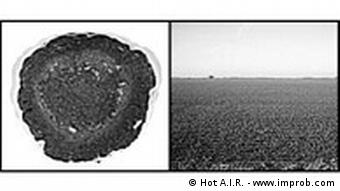 The objects of comparison: pancakes versus Kansas, USA

They mathematically shrunk Kansas to the size of a pancake and compared it with a commercially available pancake using a digital image and laser microscope. Result: If the absolute flatness index were 1, then the pancake only reaches 0.957 (flat, but not flat enough). Kansas, however, comes in at 0.9997 (damn flat).

How did we survive so long without this discovery? But there is a freedom of research. And you shouldn't be too quick to judge, emphasizes Dr. Arnd Leike, physicist at the Ludwig Maximilians University in Munich: "First of all, they say he's crazy. But it's serious."

Math in the glass

Leike knows what he's saying - he pointed out that the foam on the beer doesn't just get smaller, but that it obeys an exponential function. For this he received the Ig Nobel Prize in 2002 - a kind of anti-award for research "that cannot or should not be repeated".

The next lending ceremony will be held on October 2, 2003 at Harvard University. Then the magazine "Annals of Improbable Research" awards ten prizes for discoveries that "first make you laugh and then think". "Real" Nobel Prize winners should also come.

Foam is used to establish the truth

Leike, senior assistant in the physics section, thinks his experiment only superficially laughs. "The beer foam was, so to speak, the advertising poster," he explains to DW-WORLD. "I just wanted to demonstrate to my students how to test hypotheses in science." That is taught far too seldom - and if it does, then too boring: "I needed a memorable experiment that everyone can understand."

Unfortunately, many outsiders would only have understood "beer", but not the hypothesis message behind it. "It's a double-edged matter," says Leike, "but I accepted that". He was also not angry about the Ig Nobel Prize (ignoble means unworthy), but pleased, although he had to pay for the trip to the award himself. "I was also the first German to have one," he says.

Leike also has a thing for crazy research, which requires more mathematics than it seems. "Colleagues have calculated why the toast usually ends up upside down when it falls. You can use it to explain physics very nicely." And that is important to bring people closer to the connections so that they understand new inventions. "They shouldn't just be used like grass that the cow eats," says Leike. The Americans are much more eager to "get science out of the ivory tower. Public relations for science comes from America."

Scientists have to be tough to make these efforts. "I didn't get paid for the beer," emphasizes Leike. "But I've already drunk that - although of course it was stale after trying."