What was the highest temperature you faced

Claim: "The famous" hockey stick "curve is a fake"

The US researchers Michael Mann, Raymond S. Bradley and Malcolm K. Hughes published a study in 1999 (Mann et al. 1999) for the tree rings, ice cores, corals and other records from the northern hemisphere of the earth were used. Their reconstruction revealed that the global temperature had gradually decreased over the past millennium, but turned into a sharp upward trend in the 20th century. Or in the words of the authors:

“Although major uncertainties do not allow a definite statement for the period before 1400, our results suggest that the late 20th century is unusual for at least the previous millennium. The 1990s were the warmest decade (with moderate uncertainty) and 1998 the warmest year. The 20th century reverses a millennial cooling trend that is consistent with long-term astronomical influences. "

As a "hockey stick" hockey stick) the graphic was named because the flat temperature line of the last centuries looks like the shaft of a hockey stick, the steeply rising end like its blade. The graphic received a lot of attention because it was included in the IPCC's Third Assessment Report in 2001 (Part 1, Chapter 2.3.2.2.) And later featured prominently in Al Gore's film “An Inconvenient Truth”. 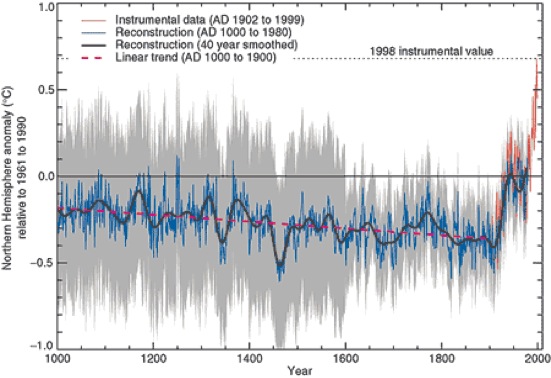 Illustration 1: Temperature changes in the northern hemisphere estimated from various proxy series (blue), instrumental, i.e. directly measured data from the last century and a half (orange) as well as the long-term trend (red dashed), the uncertainty margins that have become larger in the past are shown in gray; Source: Mann et al. 1999

A controversy ensued over the reliability of the Mann study. In 2005, the mining engineer Stephen McIntyre and the economist Ross McKitrick published a review of the work (McIntyre / McKitrick 2005). In it they claimed that the “hockey stick” was merely the result of the statistical method used (the so-called principal component analysis). In addition, the temperatures for the 15th century were based only on a single data series from the tree rings of bristle pines, which is another reason why the bases for the core statements of the study are not statistically significant. Other authors, such as the German climate researcher Hans von Storch, also published reviews (von Storch et al. 2004).

The "hockey stick" was then independently checked. At the request of the Science Committee of the US House of Representatives, the National Research Council convened a twelve-person committee of experts, which presented its final report in 2006. Result:

“Based on the analyzes presented in the original study by Mann et al. And on more recent evidence, the committee's conclusion that the northern hemisphere was warmer during the last decades of the 20th century than during all comparable periods of the previous millennium seems plausible . "

The report only pointed out minor deficits in the statistical methodology.

An investigation initiated by the Chairman of the US House of Representatives' Energy and Economics Committee, Republican Joe Barton, focused specifically on this point. The mandate for this separate study met with criticism from both Congress and researchers. The final report (named "Wegman Report" after the head of the investigation) was severely criticized for the statistical weaknesses of the Mann study. However, the report was not subjected to any formal peer review, i.e. it was not examined by independent experts before publication; his conclusions were rejected by other researchers, and he is also confronted with allegations of plagiarism.

Another investigation, independent of the review by the National Research Council, was carried out by the US Atmospheric Research Center (National Center for Atmospheric Research). Temperatures were reconstructed using a variety of statistical techniques (with and without principal component analysis) and the results were published in the journal in 2007 Climatic change (Wahl / Ammann 2007). The temperatures determined here for the early 15th century differed somewhat from those in the "hockey stick"; The main statement was confirmed again and critics were put in their place:

“Recent 'corrections' to the Mann study, which suggest that temperatures in the 15th century could have been as high as those of the late 20th century, prove to be statistically and climatologically worthless. Our investigation suggests that a slight modification of the original reconstruction is warranted for the first half of the 15th century (about +0.05 to +0.1 degrees Celsius), but this is the main conclusion of the Mann study (as well as the many other temperature reconstructions): that both the upward trend in surface temperatures in the 20th century and the highs at the end of the 20th century are anomalous compared to at least the previous 600 years. " 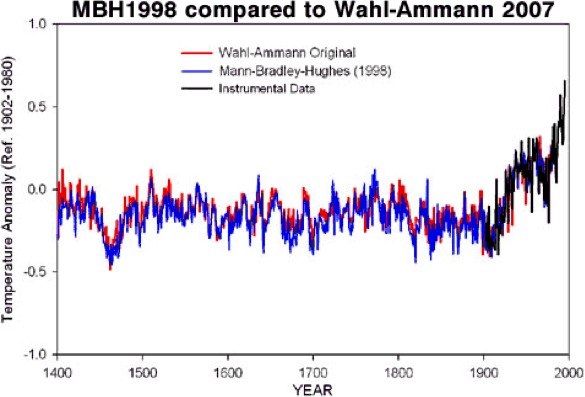 Figure 2: Comparison of the reconstruction of the “hockey stick” (election 2007, red) with the original version (Mann 1998, blue, without the representation of the error margins contained in the original) and instrumental temperature measurements (black); Source: Wahl / Ammann 2007, skepticalscience.com

To this day, many debates focus on Mann's early work - and overlook the fact that paleoclimatology has long since developed further. Since 1999 there have been many more independent reconstructions of historical temperatures. A large number of proxy data and different analysis methods were used. And they all come to the same conclusion: that the last few decades are the hottest of the past 500 to 2,000 years (depending on the database and how far back the reconstructions go).

But what are these proxies that are used to determine temperatures that were far back in the past? And how reliable are they?

Changes in the surface temperature lead to temperature anomalies in the subsurface, i.e. they cool or warm the rock. For the determination of temperatures of earlier times one uses the fact that changes in the surface temperature do not become noticeable in one fell swoop in the subsurface, but only gradually continue deeper and deeper underground. The reason for the sluggishness of this process is that the molecular diffusion, which is largely responsible for the heat transport in the soil, is comparatively inefficient (turbulence in the ocean and in the atmosphere are significantly more efficient with regard to heat transport). With measurements in boreholes, earlier temperatures can be determined - the further back you want to look, the deeper the borehole has to be. Reconstructions with this method are not able to depict short-term temperature changes, but only provide results on a century-scale. Figure 3 shows the results of measurements in more than 600 boreholes mainly in North America, Europe, South Africa and Australia (Huang et al. 2000). They found that the 20th century is the warmest in the past five centuries and the one with the strongest warming trend. 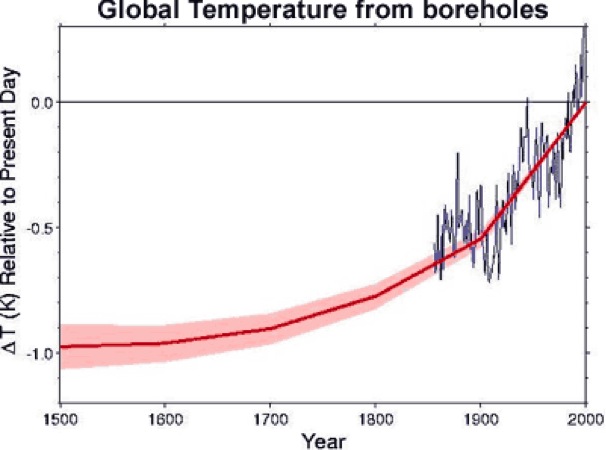 Another method for determining the average temperatures of earlier times is using stalagmites. These mineral formations are formed by groundwater within underground caves. Since, depending on the temperature, they form layers of different thickness every year, the thickness of these layers can be used as a climate proxy. A reconstruction of the temperatures in the northern hemisphere from stalagmites shows - even if the margins of uncertainty (gray areas) are large - that temperatures in the late 20th century exceed the maximum estimates of the last 500 years (Smith et al. 2006). 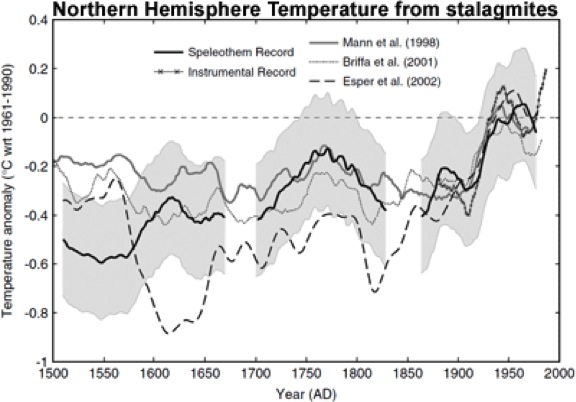 Historical records of the dimensions of glaciers can also be used as a temperature archive. As the number of observed glaciers decreases towards the past, the uncertainty increases accordingly. Nonetheless, surpass how Figure 5 shows that the temperatures determined with this method in the last decades are not only the reconstructed temperatures of the last 400 years, but also the upper edge of the uncertainty range. 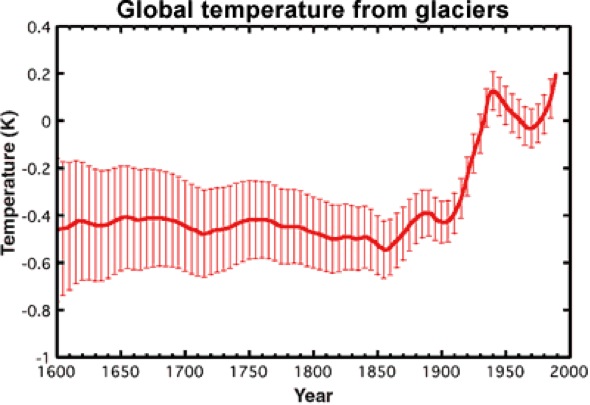 The examples mentioned only go back around 500 years and therefore do not cover the so-called Medieval Warm Period. But if you look at all the climate practices from ice cores, corals, lake sediments, glaciers, boreholes and stalagmites, it is possible to reconstruct the temperatures in the northern hemisphere relatively reliably over the past 1300 years (Mann et al. 2008). The result shows Figure 6: Temperatures over the past few decades have exceeded the maximum estimates based on proxies (including uncertainties) for the past 1,300 years. If data from tree rings are included, then this statement can even be made for the past 1700 years. 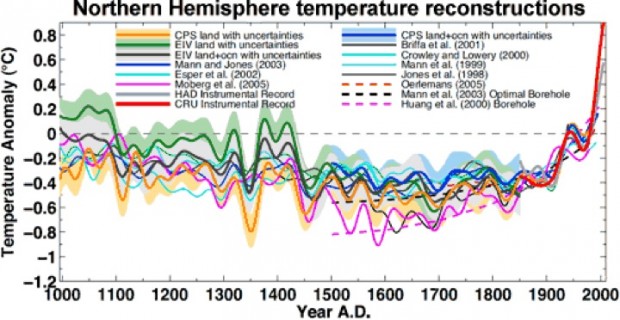 Paleoclimatology uses a wide range of proxies and methods to calculate historical temperatures. This allows an independent confirmation of the original Mann study: Even if - as science now knows - the "shaft" of the "hockey stick" is less smooth than initially thought, its blade protrudes significantly beyond it. So the most recent decades are almost certainly the warmest of the last millennium.