It was a friendly March day in 2016 when two MJ editors set out to announce it with great bombast Batman v Superman - Dawn of Justice watch. The two were looking forward to the evening, but met the Heroes of the superhero world on each other - but unfortunately the film couldn't keep what it promised. So what did the two of them do? They talked about their impressions and did what they are there for: they explained their opinion in a film review. But what was going on, what happened ?! The mediocre rating called defenders of the DC-Universe on the plan, because it would not be acceptable for someone who just did not understand the film to nag in such a way! Those film critics who ran along and who were bribed by the distributors anyway (which is why so many reviewers don't know where to go with all the money and on the Panama Papers). A storm of indignation rolled through the forum and affected many other threads. And if they haven't died, they criticize DC-Hater and Marvel-Fanboys today ... 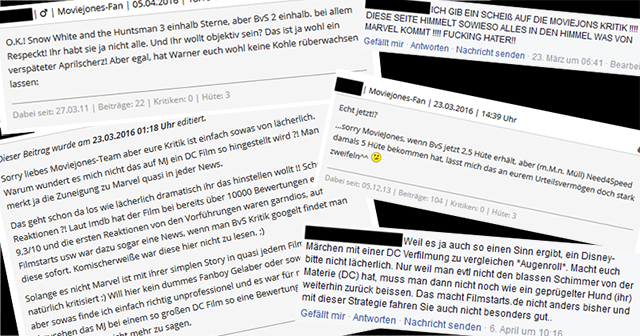 You can tell from our teasing foreword that the subject of "criticism bashing" is on the agenda. But what exactly is bashing? Are we offended when someone has a different opinion and expresses that? No! Bashing is when someone verbally attacks others in the worst possible waybecause your own opinion seems to be the only true one, as happened last. For us it is an occasion to take a closer look at certain statements that have been made and that many "film connoisseurs" like to come up with.

You are unbelievable, in 2007 you rated film XY much better!

A film is measured by what it is and what it wants to be. If we Piranha 3D have given a full number of points, it is only because the film does just that perfectly. Still, we'd never get the idea to claimPiranha 3D be better than The Dark Knightjust because the latter has less than the full 5 hats! This may have a worse rating in a direct comparison, but it is the better film, even if it does not manage for us to fully meet the ambitions and goals set in it. However, this does not mean that some films cannot be used for comparison in certain aspects. A comparison is also possible when films are related, for example in toplists.

It depends on what is expected and what is to be offered. Rating scales change, tastes change over the years. Genres are changing fundamentally. Movies based on comics were different films in the 80s and 90s than they are today. The selection was smaller, and accordingly the standard of comparison and evaluation was different. With 44,000 films in the archive, it is not feasible to make adjustments every time a new film is released, nor is it possible to know all of these films at all, which is why in older films without official MJ criticism often the IMDb-Average rating is used.

Movie reviews are like snapshots. Films can get better or worse over the years and after repeated viewing. If Batman v Superman - Dawn of Justice If it gets better in the Extended Cut, we'll take it up. Likewise, we have our negative first impression of sabotage regrets and also commented on this in the Arnie top list. When we regretted in our scathing review of Resident Evil 5 that we had rated the equally bad predecessor too good, complaints arose as to how the critic could dare to pull it over. In both cases it was "Mr. MJ" who just didn't like the films and yes, too BvS went for the most part on his hat and that's what he stands for - just like him DC Comics loves.

It is similar with IMDb-Reviews before and shortly after the theatrical release: The high ratings are often artificially boosted by those involved in the production and a certain percentage of fans. It is not uncommon for the former top ratings to fall into the basement pretty quickly.

How can you rate film XY better / worse than Rotten Tomatoes ?!

At this point it has to be mentioned that many users know how the Rotten tomatoes do not understand and because of that Average ratings and percentages are mixed up in discussions.

How RT exactly works and what the percentages are all about, you can find out here.

While we're at Batman v Superman - Dawn of Justice have reached exactly the general consensus of criticism (where the film received a 5 on a 10-point scale), we are included with our converted 7 out of 10 hats The Huntsman & The Ice Queen well above the current average of 4.7. Reaction: In the first film we are as DC-Hater unable to evaluate him better, otherwise we are accused of inability because we dare to judge better than other critics and we miss the consensus. Do you notice what? How to do it is wrong. To take note again: We are not there to cover ourselves with other people's opinions. Nor do we pretend that our opinion is the only true one.

Surely one or the other has wondered how a press screening actually works. We'll tell you the big secret:

Usually, the studio sets Germany-wide dates in the run-up to a theatrical release. We primarily go to Berlin, where the whole gang of critics gathers, whether authors of blogs, daily newspapers or film portals. The whole baggage is bribed with things like cola, a coffee or even a juice. Studios that want to be absolutely sure that their film will also get a good rating will sometimes pop a bag of popcorn.

Anyone who really believes that film studios go to the trouble of bribing critics from small and medium-sized groups with cars, luxury yachts and cash should be told that their imagination is playing a nasty trick on them. Because you know what? Nowadays there are much easier ways to influence the opinion of a film in advance, including the popular ones IMDb-Reviews, YouTuber etc. Wherever this ass-licking planet is located, where you get thousands of euros for a full number of hats ... tell us. You're welcome.

Can I trust every criticism?

That all depends. If your film tastes largely coincide with the side you trust, then go ahead and do it. Thinking outside the box, i.e. at other portals, is not wrong, but it always depends on the orientation and personal taste. A film site related to art house cinema certainly willIndependence Day not as loving as we do - it's just like being with friends who are more likely to be asked for a recommendation because they share the same taste in films.

Furthermore, critics are only human and not infallible. In the end, it is often simply your gut feeling that decides. Even if 100% of the worldwide reviews speak of an absolute film enjoyment, in the end you don't have to like the film for a long time. So who is right? And in general, consensus should always be treated with caution: There are press screenings that are overrun with people, especially during large-scale productions. And there are demonstrations when the proverbial Western bush blows through the hall. Still, all of those films usually have the same number of reviews afterwards. Smaller productions in particular have the problem that a few critics rate this film in countless media and should only one of these authors have a bad day or simply dislike the film, then the negative response is huge, because this individual opinion is not received by the masses compensated for further reviews. And yes, there are certainly also critics who like to hear themselves talk, trump others with formulations or actually want to secure entry to the upcoming party at the distributor: But we don't count ourselves here and you can believe us or not.

Our grandfather once had the following saying in his study:

My dear friend,
you are right,
the world is miserably bad.
Every human being a villain,
just you and me, of course not.

Transferred this means that the internet is full of idiots, know-it-alls, smartass and fanboys and at some point each of us belongs to at least one of these groups for someone. This is legitimate, but does not give anyone the right to shout their opinion in an insulting way into the airwaves. Those who demand respect should be respectful. Why do you read reviews? Is it just a matter of knowing your own expectations (for some already a final opinion) confirmed in advance? Why read reviews when you have already decided to go to the cinema and then get upset? So what.

We have made it our business to present our point of view in our reviews. You, the readers, may like it, but it doesn't have to be. If we started talking to you, our credibility would be gone. That is why we will continue as before. Every film gets a fair chance and only because we have the talent of Paul W.S. Anderson criticized, we will not automatically rate his films badly. Accusations will surely fall again - but it remains stupid anyway.