In Germany there are no legal requirements for people who want to open or operate a Thai massage or who work there. As a result of the boom in Thai massages in Germany and the opening of hundreds of studios in recent years, the quality spectrum ranges from black sheep to high-end.

We welcome and advocate that Thai massage is not regulated by law. Instead, we are convinced that the industry itself can set and disseminate quality standards. Standards not only give consumers security and orientation. They also help the massage studios to control their quality and to increase it as continuously as possible.

We are currently working on three projects in this field:

The Q standard with its certification guidelines are essentially divided into the following areas:

The certification process is accompanied by us, the certification itself is carried out by Thai government agencies in an interdisciplinary composition.
In addition to the Thai Spa Association Germany e.V., the Ministry of Public Health / Department of Health Service Support (Thailand) and DEP-Department of Export Promotion (Thailand).

In 2011, 14 companies were already supported by the TSpaV Ministry of Public Health excellent.

This valuable seal of quality was awarded on July 8, 2014 in a solemn ceremony in Hanover by a high representative of the Thai government to a total of seven Thai massage companies in Germany (Arnsberg, Bochum, Braunschweig, Lübeck, Mönchengladbach, Rheine, Vechelde). An audit team from Thailand has toured the cities in the last few weeks and carried out an inspection in the factories. In addition, at least five therapists employed in the companies had to be trained in a special 150-hour program and passed a theoretical and practical test.

The certification was carried out as a pilot project for the first time outside of Thailand. Until now, the "Department of Skill Development"only responsible for the quality assurance of Thai massage within Thailand. But due to the worldwide boom of Thai massage and the importance for the image of the Thai kingdom, the government is now also interested in the quality of the operations overseas. Especially in Germany, unlike As in Austria, Thai massages can be opened without proof of qualification and without special official control. According to the Thai Spa Association Germany eV, the number of establishments is estimated at at least 2,000. No wonder that black sheep have jumped on the bandwagon are: inadequate training, poor hygiene, language barriers, lack of insurance. In the media, TV reports about medical errors, dirty studios or indecentities have recently accumulated. The German consumers are also putting pressure: now tens of thousands nationwide go more or less regularly to Thai massage and fo rd an expert treatment according to all the rules of the art. 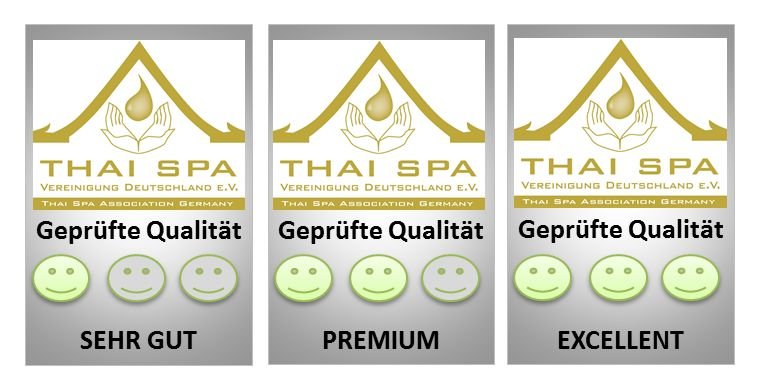 We are looking for members of a working group for this project. So far there has only been a rough sketch of the idea. The task of the working group is to work out a concrete concept and present it to the general assembly.

The first level of the quality seal should also cover the criteria for admission to the Thai Spa Association. The award should take place on the basis of a comprehensive written self-assessment.

Levels 2 and 3 should require a personal audit, an on-site inspection and written evidence.

Members who would like to work on this project, please speak to a member of the team or write an email to [email protected]

Real quality management takes a lot of time and attention. Of course, this cannot be done quickly. Therefore you shouldn't take the following test too seriously. But also not to be taken lightly, because regardless of the result, it offers many points of reference that you as a customer or owner of a business can deal with. Many improvements don't cost a lot of money, just some effort. There is advice and support for many topics if you are stuck on your own. For example at the Thai Spa Association Germany e.V., which is the pioneer in quality development in Thai massage in this country. Incidentally, the association also has to do with the test questions. It is a small excerpt from the self-assessment for the voluntary certification of the Q standard (see above on this page). It is crucial not to lose any time, but to start making the first improvements today.

This is how the test works: for every yes there is a point. At the end the points are summed up. Nobody should be discouraged or annoyed if they get a few points the first time. Just save the test, tackle some improvements and repeat it after four weeks. Freely adapted from Erich Kästner: There is nothing good unless you do it. 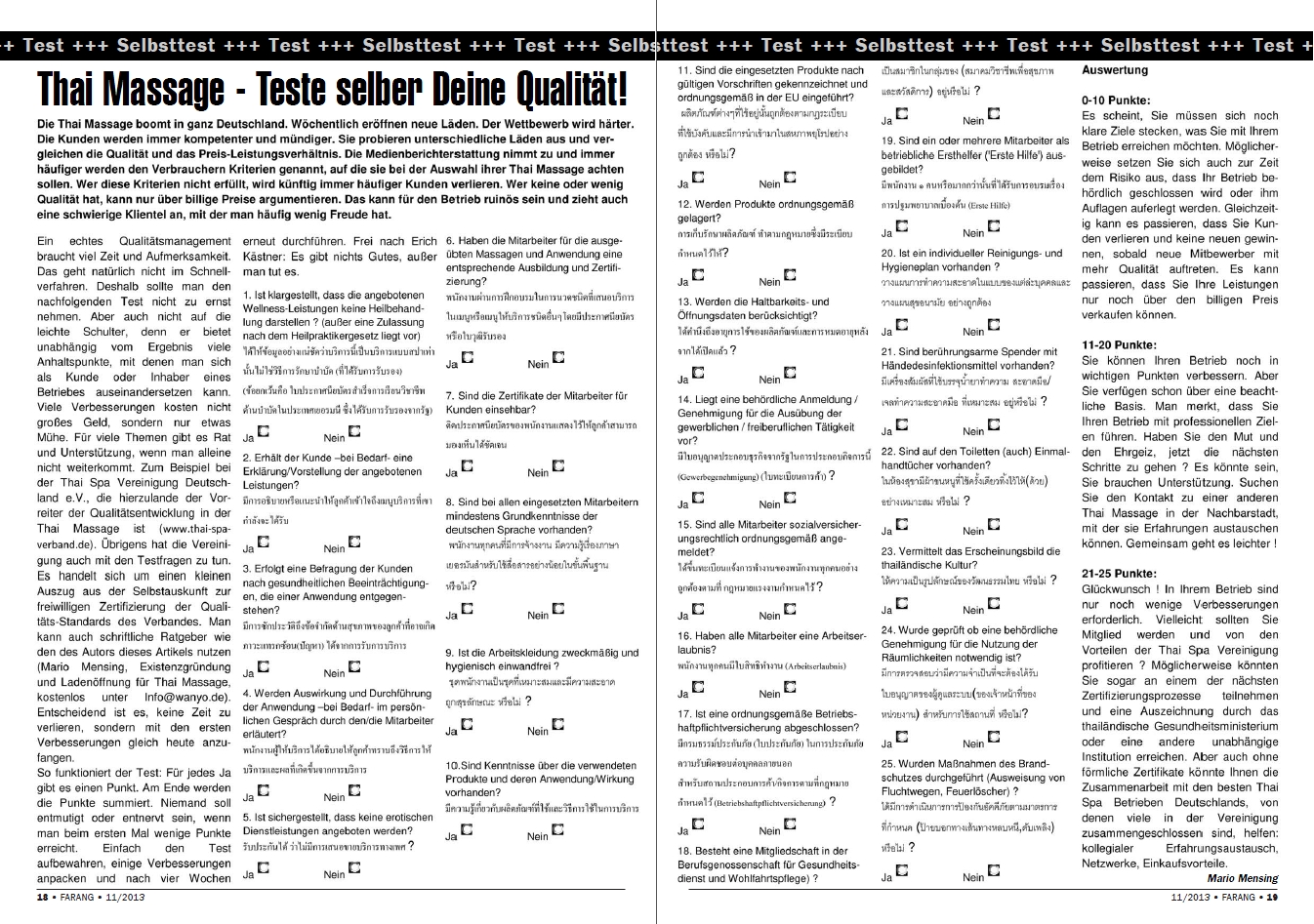