Is fracking really not economical

Fracking - yes or no?

Natural gas is becoming more and more important as an energy source. It burns cleaner than coal and oil. In addition, gas-fired power plants can compensate for weather-related fluctuations in electricity from solar cells and wind turbines. The problem: In Germany, the easy-to-extract natural gas reserves are gradually running out. Since 2006, natural gas production has decreased by a good 30 percent. Germany currently covers around 12 percent of its needs from domestic resources.

In order to compensate for this decline, the corporations now want to exploit deposits that were previously considered uneconomical - gas from shale rocks. In the shale, the gas is trapped in small, isolated pores and cracks. Only a special method, which has so far rarely been used in Germany, can help to promote it - fracking. How it works: The gas company presses water mixed with chemicals through the borehole into the depths. Since the liquid is under high pressure, it bursts cracks in the slate. These cracks connect the previously separated gas pores with one another. The result: the natural gas can flow to the borehole and be pumped upwards. 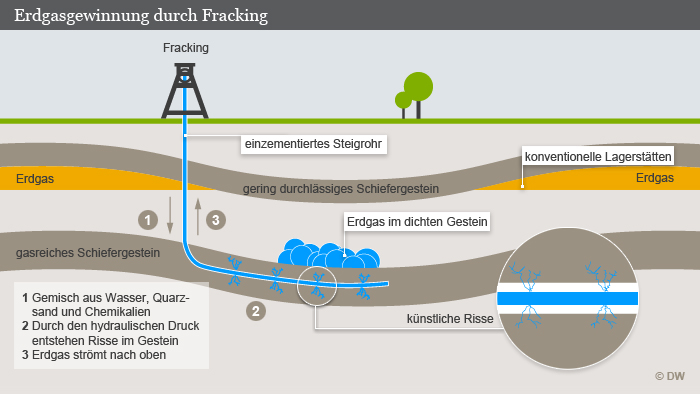 Infographic: How does fracking work?

Common but dangerous method in the United States

Large-scale fracking has been going on in the US for more than ten years - around a million times so far. Shale gas deposits now account for around 30 percent of production there. The downside of the boom: In regions like Texas, the drilling sites are close together. Not all of these drill holes are properly sealed. Methane gushes out of some and is suspected of rendering drinking water wells unusable.

There are also shale gas deposits in Germany. When gas companies such as ExxonMobil applied for test drilling to test fracking in shale rock in Lower Saxony and North Rhine-Westphalia, a wave of protest arose: In view of the environmental damage in the USA, water suppliers and citizens' groups fear massive risks:

That is why the critics are calling for a general ban on fracking in Germany. The protest comes from all classes and parties.

How clean and safe fracken? 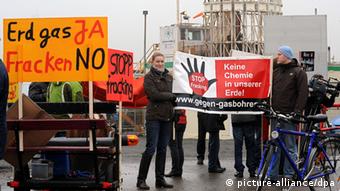 Protests against fracking are mounting. Citizens' initiatives, water suppliers, political parties - the resistance comes from all walks of life

However, some experts doubt that the corrupted wells in the United States actually come from fracking. They believe that the methane got into the drinking water through improper drilling or was caused by natural putrefaction in the ground. In addition: The conditions in the USA are not comparable with those in Germany. There are significantly lower environmental and safety standards, and the US authorities are overwhelmed with the controls.

Despite these arguments, not only residents and waterworks have reservations, but also politicians and authorities. Various reports, such as those from the Federal Environment Agency, consider fracking to be justifiable only under strict conditions. The toxic components of the chemicals would have to be replaced by harmless substances. A method is already being tested in which the water pressed into the ground is sterilized with UV radiation, instead of using toxic biocides, as is the case today. Both prevent unwanted bacterial growth in the subsurface.

The industry is open-minded: ExxonMobil has announced that it will no longer use substances classified as toxic in the future. The company had long kept the exact composition of its chemical cocktails a secret. The data have now been published on the website.

In addition, the expert reports require a geological judgment before any planned fracking process. This should examine the respective rock conditions very carefully - such as the thickness of the surface layer and the distance to the groundwater. Fracking should then be prohibited for geological areas that are too risky. 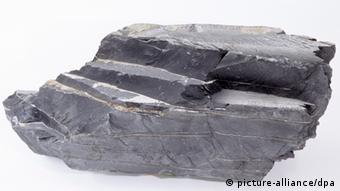 In shale rocks, the gas is trapped in tiny pores and cracks - it could be extracted with fracking

Another problem is the disposal of the wastewater that is pumped up from the underground when the gas is extracted. This wastewater not only contains most of the fracking liquid, but also reservoir water, heavy metals, hydrocarbons - and it can contain radioactive substances. The municipal sewage treatment plants do not seem to be able to treat this wastewater.

That is why the industry has a different plan: The mixture is to be pressed into old, exploited deposits. For the critics, this is not a solution. They fear that the sewage underground will find its way through the rock and at some point contaminate the drinking water reservoirs. Instead, the wastewater could be detoxified with special evaporation and filter systems. However, this procedure is very expensive.

Given the reservations, fracking should not be used in regions where drinking water is extracted. In addition, a detailed environmental impact assessment should be mandatory for every fracking drilling site. The exact criteria for such a test have not yet been clarified in detail.

Is fracking profitable at all in Germany?

The question remains whether fracking is even worthwhile in Germany. The Federal Institute for Geosciences and Natural Resources (BGR) in Hanover estimates the domestic deposits of extractable shale gas resources at around 1.3 trillion cubic meters - more than four times the conventional German natural gas reserves. In principle, that would be enough to fully supply Germany with natural gas for more than ten years.

Critics, however, believe that not all of it can be economically extracted. Because if the corporations should actually be allowed to frack in Germany, then only under stricter environmental protection requirements. But that would make the drilling expensive and time-consuming - and thus possibly largely unprofitable.