How is the color of the pixels encoded

One way in which computers can save and transfer images works as follows: A rectangular grid is placed over the image and then for each sub-square it is recorded which color prevails in this part of the image. In the coded message, each sub-square is named as a colored point pixel represents. That is why pictures coded in this way are also called Raster graphics or Pixel graphics (see Wikipedia). As an example, the image of the robot bit with different grid sizes:

Thus, every four bits of the coded message correspond to one pixel in the decoded image.

Coding images can take up a lot of space if the grid is very large and therefore many pixels have to be coded. Here it would be very practical if the image could be compressed. The compression process of the three robots' mobile phones takes advantage of the many images that they often contain large areas of the same color. The coding of such areas is relatively monotonous: one pixel of the same color follows the next. If people had to convey such a picture to themselves, they would not say stubbornly "green, green, green, green ..." but they would probably shorten it with "now there are 5 green pixels, then 20 yellow, then ...".

This one trick can also use the three robots' mobile phones. If several pixels of the same color follow one another in an image, this can be coded accordingly. In addition to the 8 color values, there are also 8 repetition instructions in the code table:

Eight yellow pixels can thus be coded to save space as follows:

Since the image is compressed, it is not immediately apparent how big the image is. The first step is to decompress the message:

So the image consists of 64 pixels. Since it has to be square, the image is now recorded in a grid of 8x8 pixels: 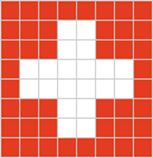 If you've already found a solution, you can check it out here: