Can we duplicate atoms infinitely?

Ytterbium as a quantum amplifier?

Useful properties: Ytterbium crystals could be valuable helpers in future quantum networks. This is because the rare earth metal can absorb and store quantum information from photons without destroying the sensitive quantum signal, as an experiment has now shown. With the combination of a fast reaction and a long coherence time, ytterbium could be used, among other things, as a quantum memory, but also as an amplifier in the quantum network, as the researchers report in the journal “Nature Materials”.

Quantum communication is considered to be the transmission method of the future. Because thanks to quantum physical phenomena such as entanglement and superposition, these light signals are extremely fast and almost “unbreakable”. Researchers have already sent entangled photon-based messages through urban fiber-optic networks, through the air, and even from orbit to Earth.

The problem, however, is that the quantum signal cannot simply be copied without destroying the integrity of the data - that is what makes this communication so secure. At the same time, however, this means that the signal cannot be amplified using conventional methods. Forwarding over extremely long distances is therefore not possible in the optical fiber.

"The difficulty is to find a material that isolates the quantum information from environmental interferences for so long that the photons can be captured and synchronized," explains study leader Mikael Afzelius from the University of Geneva. At the same time, however, this material must be able to react quickly enough to take over the spin characteristics of the photons. 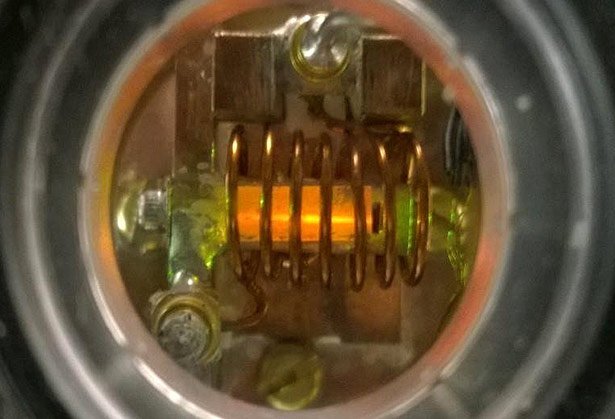 Ytterbium crystal in a magnetic field

“In our search for such a material, we picked a rare earth metal from the periodic table that has received little attention in this context: ytterbium,” the researchers report. For their experiments, they use a high-purity crystal made from ytterbium and silicon dioxide (Yb3+: Y2SiO5) and expose it to an external magnetic field.

“We found a 'magic point' by varying the amplitude and direction of the magnetic field,” Afzelius and his colleagues report. “When this point is reached, the coherence times of the ytterbium atoms increase by a factor of a thousand, even though the whole thing takes place at high frequencies.” With photons of visible light, the ytterbium atoms remain synchronous for up to 100 microseconds, for microwave photons up to one millisecond, according to the researchers.

Suitability as a quantum memory and amplifier

"This material opens up completely new possibilities for us in quantum communication," says Afzelius. "Our results underline the potential of these ytterbium crystals for quantum applications, which are based on both optical and spin manipulation."

Possible applications would include range amplifiers in quantum networks or translator units that convert optical quantum signals into microwave qubits and vice versa. But new quantum memories could also be developed on the basis of this material. (Nature Materials, 2018; doi: 10.1038 / s41563-018-0138-x)