Are antimatter and dark matter related?

Two birds with one stone: A new experiment could solve two of the greatest puzzles in physics at once - the nature of dark matter and the lack of antimatter. The starting point is the question of whether dark matter has a different effect on antiparticles than it does on normal matter. This is exactly what physicists at the CERN research center are now testing with antiprotons. So far, they have not found any asymmetry, but their measurements are only just beginning.

Dark matter is ancient and present everywhere in the cosmos - also in our solar system. But their nature is a mystery. So far it is completely unclear which particles dark matter consists of. All candidates, whether heavy WIMPs and SIMPs, light axions, sterile neutrinos or even “dark photons” have so far been purely hypothetical.

But there is a second type of matter that gives physicists and cosmologists headaches: antimatter. Although just as much of it must have arisen from the Big Bang as from normal matter, today's cosmos is dominated by matter. But why? For decades, researchers have been looking for an asymmetry in behavior or properties that can explain why the matter prevailed - but so far there is no clear evidence. 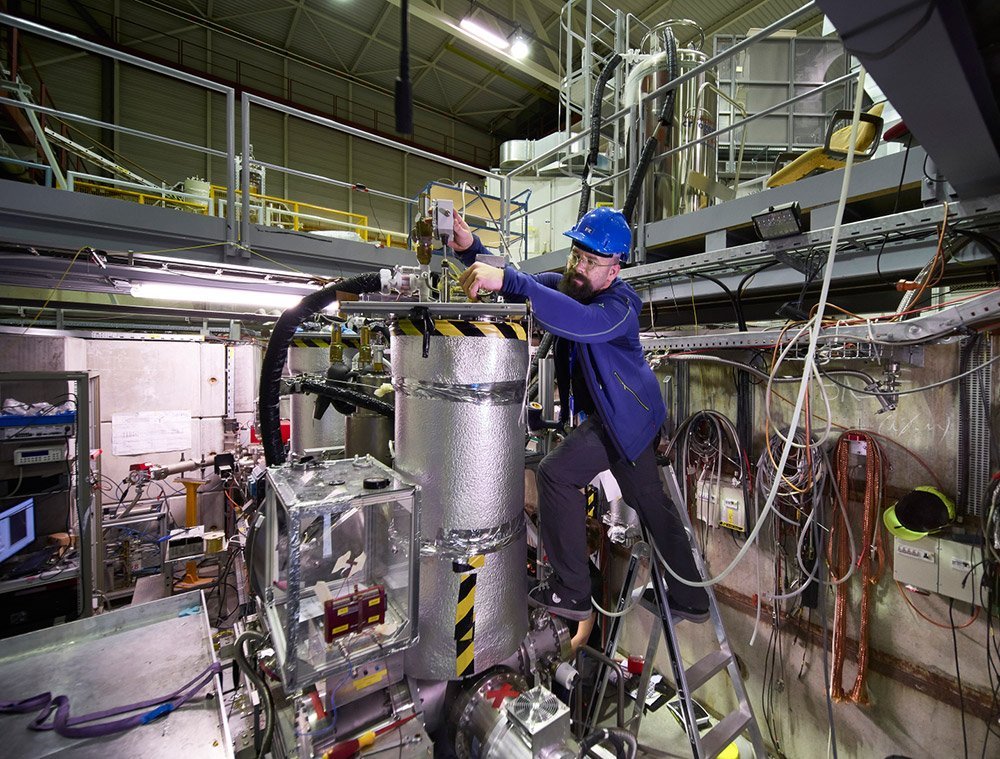 Antiprotons as a detector for dark matter

But now there is a new approach that could solve both puzzles at once - if it brings the appropriate results. "For the first time, we are explicitly looking for an interaction between dark matter and antimatter," explains first author Christian Smorra from the RIKEN Research Institute. If dark matter had a different effect on antimatter than on normal, then this could be the long-sought asymmetry - and at the same time provide valuable information about the nature of dark matter.

Specifically, the researchers investigated this in an experiment with antiprotons at the CERN research center. They locked the antiparticles in a magnetic Penning trap and caused them to change their spin through alternating magnetic action. The frequency at which this "flipping" of the self-rotation occurs usually varies in regular cycles - it shows a so-called precession.

Two birds with one stone

This is where dark matter comes into play: Should it have a stronger effect on antimatter than on matter, then this could be shown by the precession of the antiproton spins. "We consider the potential particles of dark matter as a classic field with a certain wavelength," explains Smorra. "These waves run continuously through our experiment and periodically change the actually constant precession frequency of the antiproton spin in the magnetic field."

Should such a deviation be shown in the experiment, then it would show two things: On the one hand, this would be proof that dark matter has a different effect on antimatter than it does on matter - the long-sought asymmetry would thus be found. On the other hand, however, the specific measured values ​​could help to limit the mass and energy of the as yet unknown dark matter particles. That would help narrow the candidate field.

Smorra and his team have already carried out the first runs of this test in CERN's BASE facility.

The result: So far, the researchers have not yet been able to determine any measurable influence of dark matter on the spin of the antiproton - at least not in the frequency range they were looking for. But they have not yet searched all areas, as they emphasize. And the “non-result” also provides valuable knowledge, because it excludes certain mass ranges for the dark matter particles.

"Based on the current sensitivity of our experiment, we have defined a new upper limit for the strength of a potential interaction between dark matter and antimatter," explains Stefan Ulmer, spokesman for the BASE collaboration at CERN. "We exceeded the sensitivity compared to astrophysical observations by up to five orders of magnitude."

In the future, the scientists want to further improve the measurement accuracy for the spin precession frequency. To this end, new cooling methods for protons and antiprotons are already being developed, while another research group is developing new methods for quantum logic spectroscopy of the antiproton spin. The physicists also suggest carrying out this experiment with other antiparticles such as positrons or antimuons. (Nature, 2019; doi: 10.1038 / s41586-019-1727-9)