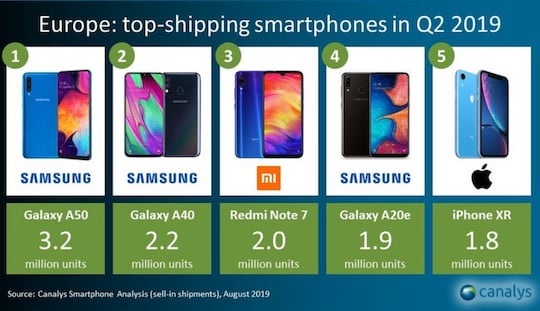 The Galaxy A50 was particularly well received in Q2 2019
Canalys The second quarter of 2019 produced two winners in the European smartphone market with Samsung and Xiaomi. Compared to the previous year, the South Korean manufacturer was able to increase the number of units shipped by 20 percent, and the Chinese competition is even 48 percent. On the other hand, things look less rosy at Apple and Huawei. The iPhone creator has to cope with a decline of 17 percent, with Huawei it is 16 percent. The political situation between the latter group and the USA seems to have had an impact on deliveries in Europe as well.

The Galaxy A50 was particularly well received in Q2 2019
Canalys The market research institute Canalys has published a survey of smartphone manufacturers for Q2 2019. Particularly noteworthy is the high popularity of Samsung's current Galaxy A series. The manufacturer delivered 12 million units of this product family from April to June. All in all, there were more deliveries of the Galaxy A10, Galaxy A20e, Galaxy A40 and Galaxy A50 than any other manufacturer in Europe with its entire portfolio. With 18.3 million smartphones shipped and a market share of 40.6 percent, Samsung secured first place by a large margin. Compared to the previous year, this means growth of 20 percent.

Huawei was able to defend its second place, but with only 8.5 million smartphones put into circulation (market share: 18.8 percent). Apple secured bronze with 6.4 million deliveries and a market share of 14.1 percent. The most sought-after model by the Californians was the iPhone XR.

Xiaomi with a clear plus in Europe 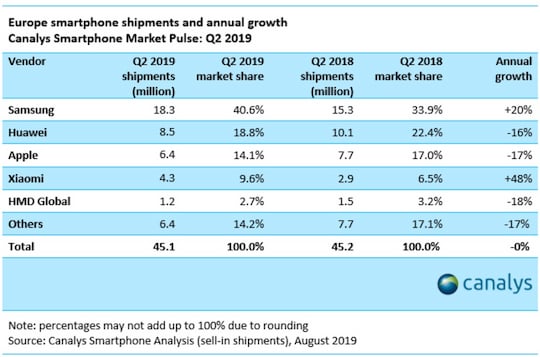 The current smartphone manufacturer market distribution in Europe
Canalys Xiaomi's opening up of European regions is gratefully accepted by consumers. In Q2 2018, the China manufacturer shipped 2.9 million smartphones, which corresponded to a market share of 6.5 percent; in Q2 2019, the numbers rose to 4.3 million deliveries and a 9.6 percent market share. The company thus achieved growth of 48 percent. In addition to the good price-performance ratio, among other things, the increasing interest of network operators is responsible for the success. With the Redmi Note 7, Xiaomi was able to score particularly well in Europe.

The top five are rounded off by the owner of the smartphone brand Nokia, HMD Global. There it went from 1.5 million copies shipped (Q2 2018) to 1.2 million, which led to a market share of 2.7 percent.